Persepolis is one of the oldest and most famous historical sites that stands in Iran and is definitely one of the most impressive.

During the Achaemenid Empire (550-330 BC) over 2000 years ago, Persepolis was the capital city of the Persian Empire. In Persian, Persepolis is called “Takhte Jamsheed” (the throne of Jamsheed) and is literally translated to “city of Persians.” The historically famous ancient ruins display Achaemenid style of architecture. It is believed that Cyrus the Great (“Koorosh” in Persian) chose the site for the city, but it was Darius (“Daryoosh”) who was responsible for building the palaces.

Darius ordered the construction of the Apadana Palace and the council hall (the Tripylon) and its surroundings. It was during the reign of Darius’s son Xerxes the Great (“Khashayar”) that the buildings were completed. The buildings at Persepolis include mainly military headquarters, treasuries, and reception halls.

The city of Persepolis was destroyed by Alexander the Great after he invaded Persia in 330 BC in revenge for the Persian king Xerxes destroying the Greek city of Athens.

If you want to visit Persepolis, you have to do a day trip and visit Pasargad and Naghshe Rostam (post to come) all in one day. Persepolis is also located about 2.5 hours away from Shiraz and only about 43 km from Pasargad.

The “Persepolitan” stairway is a grand staircase that leads up to the main palace. The staircase is double sided and built symmetrically on the western side of the Great Wall.

“The Gate of all Nations” consisted of a great hall with its entrance on the western wall. A pair of bulls with the heads of bearded men, Lamassus, stand by the western threshold. Another pair, with wings and a Persian head (Gopat-Shah), stands by the eastern entrance, to reflect the Empire’s power.

Engravings of people bringing gifts for the king. 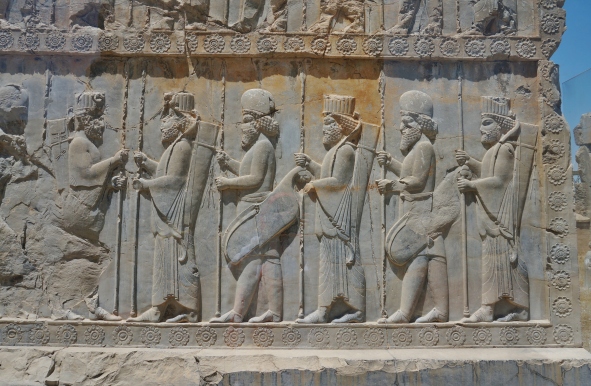 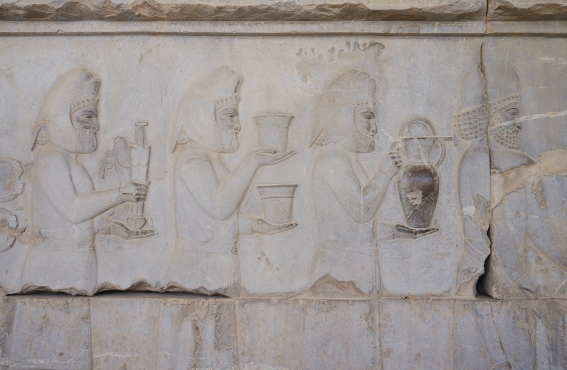 Persian and Median noblemen in friendly conversation, bringing gifts for the king.

An engraving on the Bas-relief of Persepolis on the grand staircase depicting the Zoroastrian tradition of Nowruz (new year): a bull (symbolizing the moon), fighting a lion (symbolizing the sun) which represents the beginning of Spring.

About a 15 minute hike up into the mountains from Persepolis’s main palace ruins lies the tombs of the kings of Persia during the time of the Achaemenid. 2 or 3 of these tombs within the mountain exist, and it is believed that kings such as Xerxes and Darius are buried within these mountains. I took the panoramic views of Persepolis from the top of the mountain. 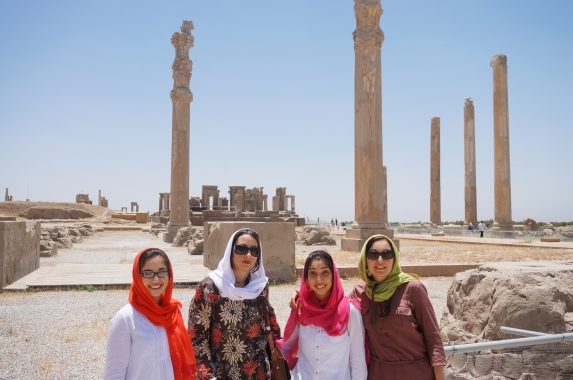 One of the most impressive features of Persepolis are the tall columns that have stood the test of time and war. One would wonder what sort of technology existed in 500 BC that allowed for the creation of these gigantic stone columns. 15 of the pillars are still intact today. You can tell how tall the pillars are by comparing them to the people at the bottom of the photo.